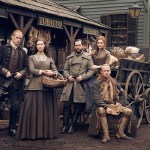 Where has the lass gone?!

“Sing me a song of a lad that is gone.” Wait, what?! For 5 years, it has been a lass that is gone, referring to Claire Fraser. Why is it lad?! Does something happen to Jamie? Or Jemmy?! Jemmy can actually time travel! Okay, the reason I now think it’s Jemmy that might be the gone lad, Gone Lad — sounds like the Scottish remake of Gone Girl. (*I laugh to myself). Back to Jemmy being a time traveler. In the credits he is running by himself in a field. Now kids wander off. But a time-traveling kid, if you tell him not to run off and touch the stones, he’s probably going to run off and touch the stones! Kids! They never listen!

New episodes of Outlander are just a few months away. But to tide you over, here’s a sneak peek at the new opening credits for season 6, which will premiere on March 6, 2022. Caitríona Balfe and Sam Heughan and their alter egos Claire and Jamie Fraser are back on our screens. For five years now, every Outlander episode starts with, “Sing me a song of a lass that is gone,” about Claire Elizabeth Beauchamp Randall Fraser disappearing and falling back 200 years. In the new opening credits, something is very different. We’re breaking down the opening titles for you frame by frame. It’s a full one minute and thirty seconds. Spoiler alert: There is a new Jamie and Claire love scene that flashes before your very eyes. Should we just stop the breakdown here? It’s already everything you want for season 6 in one single second.

So about that love scene, it’s actually three seconds. Not one second. Jamie Fraser is not a one-second man, people. Ask Claire. Other shots show Jamie riding a horse and Claire with a huge shotgun. Claire is packing! And she looks like she’s running out to the ridge full of people where men are fighting. Someone looks like he’s getting punched, and I hope it is not Jamie. He’s been put through too much, as has Claire, as has their whole family. Last season, Claire shot a buffalo that had just bowled her daughter over. Send thoughts and prayers to whoever is on the other side of Claire’s pistol, they’re going to need it. I hope it’s someone from the evil Brown family, because then they deserve it.

The other thing you might notice right away is that the theme song is for the first time sung by a man! “Jesus H. Roosevelt Christ!” as Claire Fraser would say. The male singer starts and is joined by a female singer halfway through. This further supports the theory that a male disappears. Fun fact: this song is originally “Sing me a song of a lad that is gone,” about Bonnie Prince Charlie — you remember him, from Season 2? He was always shouting, “Mark me!” to Jamie. He apparently escaped Scotland after the Battle of Culloden dressed as a woman.

The one person who we don’t see in an obvious way is Jamie and Claire’s daughter Brianna. She may be lighting a match. Jemmy has longer hair and is older. Roger seems to be in a church and has a large beard (which they don’t show but I know it’s there). Young Ian is shown quickly in profile and also galloping on a horse. Marsali is weaving. Weaving? Probably to make clothes to dress all those kids! Fergus is drinking by a fire alone. Probably because he has to also dress all those kids. Fergus and Marsali will have a particularly riveting season it seems, by what Lauren Lyle and Cesar Domboy have teased. And also in the sixth book, A Breath of Snow and Ashes – Diana Gabaldon puts them through the wringer.

You’ll also notice Caitríona Balfe and Sam Heughan are listed as producers again this season. The difference is last season they became producers after a few episodes, this will be the first season they are full producers.

The final frame is Jamie and Claire on the edge of a precipice looking out and it’s snowing. Winter is coming. But Jamie and Claire are still hot, some things will never change. Is it March 6th yet? Watch the entire new opening sequence here.

Some other things to look forward to after you re-watch these credits 200 times, is Diana Gabaldon’s newest Outlander book, Go Tell the Bees That I Am Gone, just came out! Also, the first episode of season 6 will be 90 minutes long. Correct, we get a whole an hour and a half to catch up with Jamie, Claire, Brianna, Marsali, Roger, Young Ian, and Fergus. A supersized Outlander episode, you deserve it!

Before you go, check out the all-time best ‘Outlander’ episodes you need to watch.