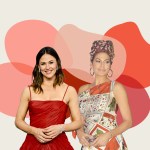 “I remember when I was little I would like, dream of Tetris,” Alba tells SheKnows of her gaming youth — her dad was an avid player and now passes his talents on to her kids, Honor, 13, Haven, 10, and Hayes, 3, whom Alba shares with husband Cash Warren. With the holidays around the corner, Alba tells us what she’s looking forward to most about the upcoming quality time with family and opens up about what life is like these days at home — including the particular challenge of raising a teen daughter and a toddler at the same time.

If you know anything about Jessica Alba, you know she’s a woman of many talents. Actress, mom of three, and of course founder of the Honest Company, a billion-dollar clean consumer goods company, Alba has one more hidden talent you may not know about: she’s a lifelong Nintendo player who’s not afraid to show her competitive side whether she’s busting a move in Just Dance 2022 or sneaking in a quick Ring Fit Adventure workout.

Most of the time, Alba’s just trying to keep up with her quickly, quickly-growing brood: “Hayes has a lot of energy and he loves to launch himself off of high places….that’s really terrifying,” she says of her highly energetic 3-year-old. But even with the chaos, she sometimes wishes time could just stop.

With daughter Honor in 8th grade this year, Alba has noticed a change in her eldest: “She’s really taken on the role of a big sister and really is considerate of…the impact that her actions and her words have on [her little sister] Haven,” she says. When it comes to little brother Hayes, however: “She loves torturing her little brother. Haven is more of the like maternal one in that relationship, and Honor just loves to tease him,” Alba admits.

Read on for more details on the Alba-Warren household: their Nintendo battles, holiday traditions, and more.

“Every day I look at [Honor] and I’m like, Did you just grow like more? Last night?” Alba says. “Stop sleeping kid, because every time you wake up, you’re taller!”

SK: That’s so fun that you could take it from your own childhood and play it with your kids now. Who is the biggest gamer in your family right now?

JA: We all love to play it as a family, but I would say my kids and my husband and my dad — they probably play more than I do.

SheKnows: Tell us about your partnership with Nintendo, how long have you been a fan?

Jessica Alba: I have been a fan of Nintendo since I can remember, really. We had a console in the house growing up. My dad played Nintendo and I played Nintendo, my brother, as well. And it was a bonding time with my dad — we would watch him play and we would cheer him on and we would play ourselves. I remember when I was little I would like, dream of Tetris, and I was obsessed with math and geometry and structures, and I think it’s probably because of Tetris. I just loved it. And my kids like to play. My dad still likes to play. And my husband.

SK: You mentioned Tetris — what are some more favorite games that you play with the family?

JA: Well, Just Dance 2022 is really fun with the family, because everyone sort of has their own spin on the dance moves and it’s just always a fun one to play with a group. Mario Golf: Super Rush is fun and hilarious because my dad insists on like, running with his legs, for no reason. But my dad and my husband and the kids are super competitive with that, and it’s great. And then Big Brain Academy is cool because no matter what sort of stage or age you are, you can kind of adjust your level so that it evens the playing field. And it’s more of like problem-solving and puzzles and things like that, which is always fun. And then they have this game, Ring Fit Adventure, which is great because it is like an adventure game, but you are moving your body around on a consistent basis, so you sort of forget that you’re getting in some good exercise because you’re so concerned with beating that level. So that’s another fun one.

SK: Does it ever get competitive at home when you guys are playing?

SK: Were there any surprises for you having a boy after having two girls?

JA: I hate to generalize, but Hayes has a lot of energy and he loves to launch himself off of high places. So that is something that my girls never were tempted to do, but he just loves to climb and launch himself, and that’s really terrifying. He also doesn’t love walking. He loves to run, so there’s not a ton of walking. But he’s super, super sweet. He also is very athletic — not that my girls aren’t, but this kid, before he could walk, was throwing a ball perfectly straight or basically turning any item in front of him into a ball that he would throw across the room perfectly.

SK: Your daughter Honor is in 8th grade now. What’s it like having a teenager in the house?

JA: It’s interesting. I’m actually really proud of her, she’s really taken on the role of a big sister and really is considerate of…the impact that her actions and her words have on [her little sister] Haven. She gives her friend advice and homework advice and it’s really sweet. And then Hayes — she loves torturing her little brother. Haven is more of the like maternal one in that relationship, and Honor just loves to tease him, which is funny. She’s cool. She’s so tall. Every day I look at her and I’m like, Did you just grow like more? Last night? Stop sleeping kid, because every time you wake up, you’re taller!

SK: Finally, you’re such an influence in the beauty space. Can you share your winter beauty product recommendations?

JA: Oh, yeah. I have super sensitive and dry skin, so we created a product called Calm + Heal Melting Balm, and I just slather it on my face in the morning and at night. It is literally a game-changer.

SK: With the holidays coming up, are there any family traditions that you’re looking forward to?

JA: We always love cooking around Christmas and even just leading up to Christmas, it’s nice having family over. My husband’s family and my family all live near us. So we do a lot of just having the parents over, the grandparents over, and getting cozy and spending time. It’s just nice, it feels really cozy during the holidays, and we look forward to that.

These celebrity moms make us all feel better when they share the highs and lows of parenting.