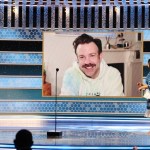 We love to see supportive exes! Jason Sudeikis and Olivia Wilde both appear to have moved on from their shocking split — Wilde with Harry Styles and Sudeikis with model Keeley Hazell — but judging from their behavior during last night’s Critics Choice Awards, maybe there are no hard feelings? Sudeikis made sure to thank Wilde in his acceptance speech and she returned the favor on Twitter. It was almost like they were almost like a cute couple again… almost.

Wilde made sure to return the favor on Twitter, with a hilarious tweet that poked fun at his interesting outfit choice for both the Golden Globes and Critics Choice Awards. She wrote, “I hope this means we all keep wearing hoodies when the ceremonies are in person next year.”

Sudeikis’ show, Ted Lasso, took home a slew of awards; winning Best Comedy Series with Sudeikis winning Best Actor in a Comedy Series and his co-star Hannah Waddingham winning Best Supporting Actress. And In his acceptance speech, he thanked his ex, saying, “I want to thank their mom, Otis and Daisy’s mom, Olivia, who had the initial idea for this as a TV show.” He explained that it was Wilde who had said, “‘you should do it as a movie or a TV show.’ I was like, ‘No.’ She was right.” We love that he gave her credit even after everything they’ve been through.

Congrats to Jason and the entire Ted Lasso family on your @CriticsChoice wins! @jasonsudeikis @hanwaddingham @brendanhunting @joekellyjk47 @VDOOZER! So happy for you guys. I hope this means we all keep wearing hoodies when the ceremonies are in person next year. 🙌

Before you go, click here to see celebrity exes who will always be friends.

Splitting up and then co-parenting — especially during a pandemic — isn’t easy on anyone, so it’s refreshing to see these two making it work. (Paparazzi even snapped them doing the kid hand-off earlier in the day before the ceremony.)  And since we’re pretty sure these two successful stars will keep making award-winning, thank-you-speech-necessitating work, we can’t wait to see what other kind and funny exchanges they’ll have that the rest of us can listen in on.