Jhonni Blaze aka Jzapal Von Krishna has been a bit of a wild card for most of her career in the spotlight.

But this season of “Growing Up Hip Hop: Atlanta” we’ve seen her owning up to past mistakes and opening up like never before. We spoke with the talented beauty earlier this month about some of the most difficult moments she’s had on reality tv, her very public mental health journey and her relationships with Da Brat, Bow Wow and Drake. Check out our Q&A when you continue. 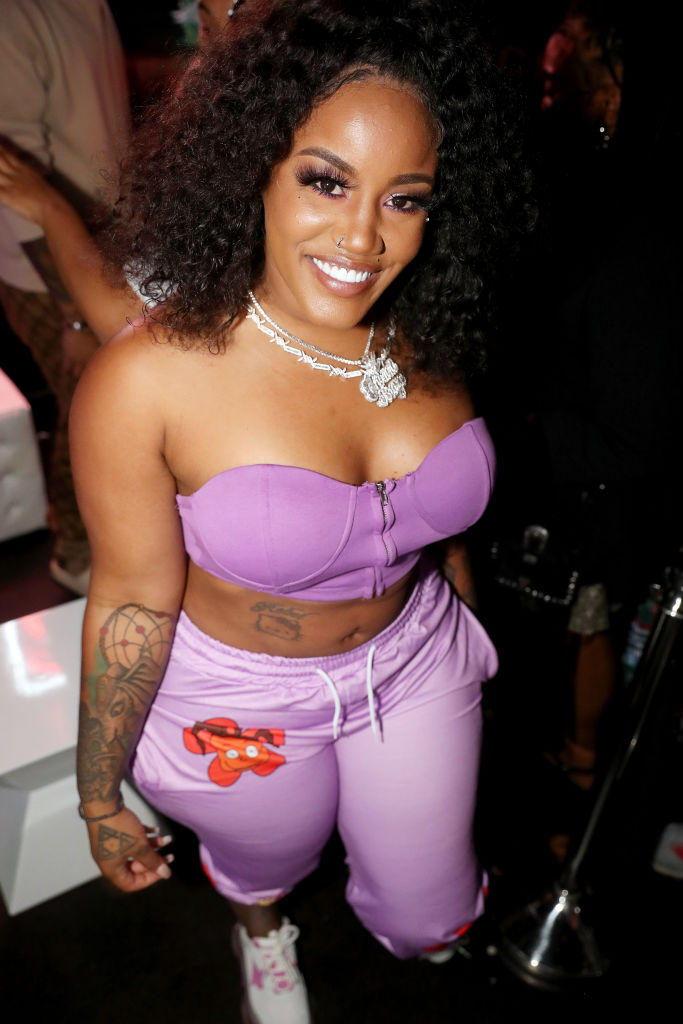 Jhonni Blaze: I love Atlanta. I’m focused on my music, I have a new team. I’m currently in LA working with Macy Gray for the third day. We’re working on some records for my EP. It started off with, I sing and twerk, so I was like let me play piano and twerk. People book me to remix their songs on the piano, so I move the seat and twerk and play piano. What happened was 2 Chainz reposted it because I did his song and Macy seen it and two weeks later I’m in here in LA for the third working on my EP. The next day I have Ne-Yo and the day before I had NLE Choppa. (she laughs) It’s just social media. My team is really big on marketing so they were like focus on content. So that’s what happened.

BOSSIP: What’s new with Jhonni Blaze? How is Atlanta treating you?

BOSSIP: Earlier this season we saw you express your frustrations to Deb about your career being stalled, how does it feel to have all this great movement and be in the studio with these other artists?

I’ve been working like every day on top of the TV show and rebranding myself, it’s wonderful but you have to have a lot of energy. Right now I’m about to go to a session with her and it’s all because of social media.

BOSSIP: Your anxiety attack aired on national television, was that difficult for you to watch or have publicized in that way?

Jhonni Blaze: Allah, Jesus had called me on the phone, like maybe if you just get some patience I could help you, swing my little wand and help things develop. Yeah, Jesus and me talked, we’re good.

The problem is that people get so scared like, “Oh my gosh you’re taking medication,” “Oh my God you’re depressed.” Yes, I have depression but even though I’m sad I’ll still get up and do what I have to do. I have wonderful family and friends around me. Seeing that on tv in front of millions of people, it didn’t affect me. I’m different, I’ve been through so much that it keeps me going. It’s like okay look that happened, it’s go time. There’s nothing wrong with taking medication and helping yourself. There’s nothing wrong with having friends and family around you. It’s nothing wrong with bettering yourself. Having this life changing situation and make it better.

Jhonni Blaze: A lot of artists have a tendency to hide their flaws, I guess they call them flaws, I don’t call them flaws. I’m like a female Eminem, if you’re going to air me out, I may as well do it myself. That was the biggest change in my life. Mental health and depression and anxiety is the biggest thing that I’ve had. I’ve been dealing with it for years and I had to take a step back and get counseling. There’s nothing wrong with talking about it.

BOSSIP: Finding the right therapist can be so instrumental in working through depression and anxiety. How has it helped you?

From that episode to now, I’ve gotten counseling, I have great people around me and I’m focused and I’m happy and I continue to speak about depression and anxiety because people have a tendency especially in the black community to overlook it and not talk about it. I don’t want to be that artist. I will never be that artist. I’ve helped thousands of people. I’ve had women DM me, especially asking for help after that episode. Why would I want to hide that? Why would I want to take that away and not help somebody and be this wonderful person to help someone or give them someone to talk to? My life changed on a positive note because of that. I was really scared at first. I thought, ‘They’re not going to understand.’ Again because in our community they don’t look at stuff like that. We shun it and go oh this is crazy but it was one of the things in my career that was shocking because it went positive.

BOSSIP: This season it seems like every time your name comes up Da Brat and Bow Wow have negative reactions. How do you feel about that?

Jhonni Blaze: Girl, I got a therapist and a psychiatrist and I got Jesus. I think I’m good now! I have these therapists, whatever I learn, when my friends are going through things, now I can help them structure their life and not judge them. I’m an empath. It’s given me tools to help other people.

At the end of the day it does not matter what anyone else thinks. It’s what God has for me and what my team has put in work. I had to take a long time to get this way, because back then if I had seen the episode with Bow and Brat saying those things I would have been on social media going off. And it’s no point on going off on others people’s opinions and being upset when there are millions and trillions of other people who have not seen me yet. My main focus was my mental again and that’s what structured me not to care what they say because they have a right to have an opinion. I did some crazy things in my life but they have a right to have an opinion. And just a spoiler alert, they actually love me if you just keep watching the episodes.

It doesn’t matter what they think. No offense to Da Brat, no offense to Bow, it doesn’t what a thousand people think. It doesn’t matter what one person thinks. It matters what God is putting in my life and it matters what my team is doing. We’re cool. Me and Brat is cool. Me and Bow is cool. But when they say, we don’t know about her music, we don’t know what she’s gone and I’m sitting here looking at Macy Gray like, “Hmmmm want some cookies? What vocals am I supposed I do?” Or when I’m in the studio with Ne-Yo sitting with his wife sipping champagne, or when I’m going over here with NLE Choppa or I’m going over here with Pop Hunna that does “Corvette, Corvette” and I’m like okay just keep working.

Jhonni Blaze: Just to correct you, I wasn’t a sex worker, I was trafficked. I was a child. I got snatched at 15, 16 and I got out of it at 17. I was molested at 14. I was on a lot of different drugs and stuff and I’m recovering — it’s about to be 8 years. I was dealing with being human trafficked. All of those things are why my skin is so tough. Just focusing on what happens, putting that pain and those memories into music, it will touch people in the world.

BOSSIP: You’ve been outspoken about your past as an exotic dancer and being a sex worker, did you opt to just tell your truth rather than have someone else out you?

Jhonni Blaze: All I know is that my new single is about to come out and we’re gearing up for that and I’m sure baby Drake will see it and love it. That’s what I’m going to say.

BOSSIP: You recently did an interview saying you regretted accusations you made toward Drake, have you heard from him since doing that interview?

Jhonni Blaze: What Kevin Hart say? It’s about to go DOWN. I can’t spoil it. I’m a Gemini. I really be wanting to talk about it. Definitely tune in because it’s about to go down.

BOSSIP: Anything else you want people to keep a lookout for from you?

A new episode of “Growing Up Hip Hop: Atlanta” airs tonight at 9PM EST on WeTV!

Props to Jzapal aka Jhonni Blaze for turning her challenges into a champion.